It’s been well over a month since we have had our chickens set up,
and we enjoy them so very much!
Only issue so far was a coyote attack when they were free ranging in the upper pasture.
During the DAY!
We have one wiley coyote here, it is way too unafraid. Dangerous.
Anyway, here are pics of the progression of our coop.
It started with sketches by Paul, then was modified during the construction phase.
Designed to hold 30 chickens… 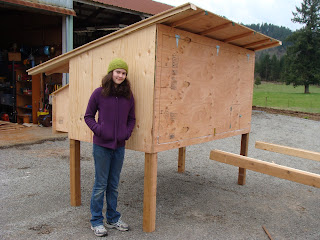 Paul designed these nifty “forks” for the tractor bucket. They are used to move the coop around the pastures and can be used to move large things, like trees, etc. 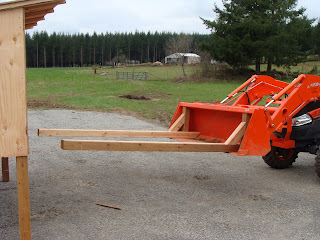 Here he is practicing and testing the forks. 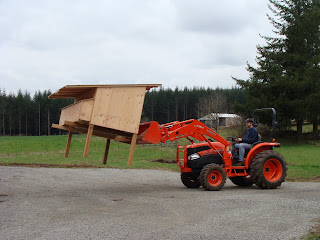 We calculated one nest box for every five laying hens… here is a shot of the nest boxes, accessible from the back so we can clean them and collect eggs! 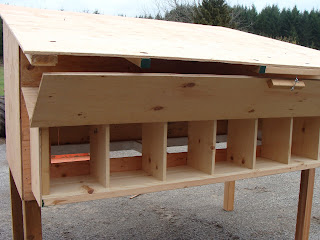 We chose a red paint (called pinot noir), so I tinted the primer pink… I really considered leaving it this color. We just left some pink touches under the eaves instead. 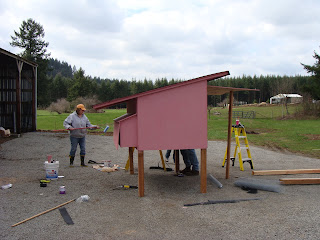 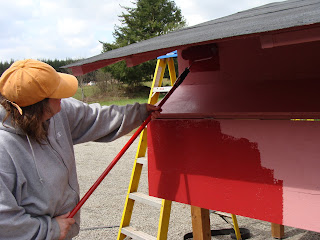 There are three roosting poles inside, something for everyone!
The bottom was initially just wire, but we added a piece of plywood to keep the draft out. Plus the bedding can build up and compost itself this way. Keeps the odors down and the bedding can later be added to the compost bin! 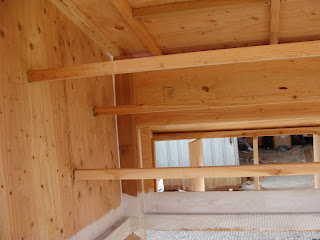 Paul installed latches on the front to keep predators out. 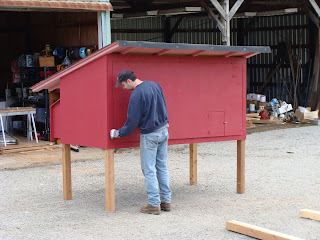 Moving it took some slow tractor driving, but the forks work perfectly! 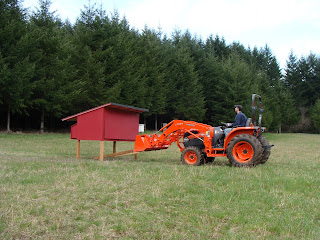 A ramp for easy entry and exit…
at night we remove the ramp and lock the door so they are safe from coyotes!
I would love to rig some sort of timer so the door opens itself in the mornings, our rooster (Salatin) wants out to crow and the crack of dawn. 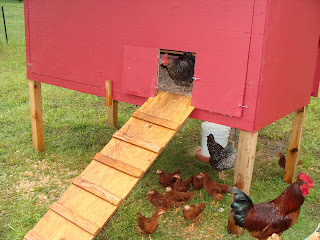 The coop is surrounded by a moveable chicken wire fence.
This has been somewhat adequate, but we recently ordered an electric mesh fence, since our coyotes here are NOT nocturnal. The dogs and I have run them off on several occasions… trying to get into the fenced area… and during the DAY. 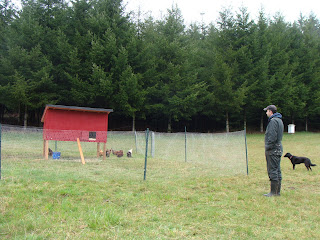 We have moved the coop to three different locations so far, this gives them fresh pasture to eat and pick and scratch in and keep the poo moving around to fertilize the fields.
More posts coming soon… too much to put into one post. 🙂
http://www.PeculiarAmbitions.com
By peculiarambitions|2016-12-09T00:13:42+00:00May 7th, 2011|Categories: chickens|